Bryan is my brother in law. He married for the first time last year, he was in his late 30’s. Bryan married Diane. She had been married once before and came to this marriage with 2 young girls, Sariah and Julia. I know very little about the story of their courtship and marriage, that story is theirs. I would like to tell this story from my perspective.

I don’t believe Bryan thought he would ever marry. He was kind of a loner, didn’t communicate easily, never seemed at home around people, even his family. He lived several hours from his family and for a long time seemed to visit as infrequently as he could get away with. He seldom smiled, had no real relationship with his nieces and nephews, told us little if anything about his life. We worried about him, we prayed for him, we hoped the best for him, but he didn’t let us in.

As time went on Bryan began to talk a little more, to stay a little longer on his visits home. He even began to play board games with the family! He began to look forward to visits from his sister and my daughters, he opened up just a little bit more every time we saw him. Then he brought home Diane and her daughters.

Bryan and Diane dated for a while, I have no idea exactly how long, but they knew each other a lot longer than he was willing to tell us. He kept her and the girls a secret, why? Maybe he wanted to enjoy them alone for a while, maybe he wasn’t sure where the relationship was going, maybe he was afraid, maybe he thought the family would scare her off, maybe he just didn’t believe she would really want him. For whatever reason we didn’t know about Diane for quite a while. Then he brought her home. I think it scared the pants off of him! From a conversation I had with Diane I learned that he had given her all the details of the family to prep her.

After spending just a couple hours with them the biggest thing we learned was that it truly felt like Diane and the girls had always been a part of the family. The sense of humor, the teasing, the laughter, the conversation, the ease with which we all got along was amazing and amazingly familiar.

Someone asked me what I thought about Diane after that first meeting and I told them that I didn’t really have a opinion about her, I had just met her, but that I really liked who Bryan was when he was with her. He was finally at ease with himself, he smiled readily, he hugged, he talked, he radiated happiness. I think that’s the biggest compliment I could give Diane.

Bryan and Diane took their time coming into this marriage. They got to know each other well. They talked a lot and learned about each other. They took the time to make sure the girls had a relationship with Bryan and felt good about the relationship he had with their mom. They didn’t rush and base choices on superficial things.

So Bryan and Diane married. 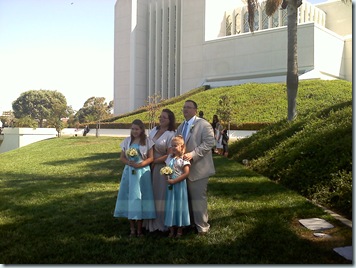 They moved their family near us, we see them at least weekly. We share our lives, the raising of our children, our laughter and our tears. We help each other, we work together, we are learning to know one another better. We are so grateful to have them near, to be a part of their lives. And yes, the more we learn to know them the more difficult it becomes to remember what life was like before they cam into our lives. It truly does feel like they have always been a part of us.

These two people work well together. They talk things out, they are patient with each other and the girls. They have learned to compromise, to listen, to appreciate what they have. Marriages that come later or are a second marriage often come with a load of baggage and a fair amount of trials. I believe that these two have all they need for a successful and happy and very long marriage. They are a great example of what it takes to get it started right and make it work forever.